From Ashes of the Singularity Wiki
Jump to: navigation, search 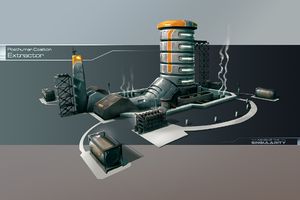 The in-game economy is governed by a number of inter-dependent resources. Basic resources (Metal and Radioactives) determine your ability to construct units and buildings, which is increased via controlling and upgrading region on the map. These in turn allow you to accumulate Quanta, a tech resource that is accumulated via constructing Quantum Relays and Quantum Archives. Quanta can then be spent to either upgrade the stats or maximum-size (Logistics) of your army, provide a boost to basic resource economy, or powerful one-time abilities. A separate resource called Turinium provides the victory-point equivalent for this game: capturing and holding those regions on the map will eventually generate sufficient Turinium to trigger critical-mass and convert the planet to your faction.

Radioactives constitute the basic streaming economy in Ashes of the Singularity, which must be mastered for good play. This means balancing the income and expenses so that you are not drastically over-spending with zero left in storage (crashing), or under-spending with maximum amount in storage (floating). This balancing act is generally more important than having the capacity to reinforce on demand since the starting storage limit for basic resources is only 500 (sufficient only to build several basic units without additional income), and upgrading that capacity costs valuable Quanta.

Note that when a crash occurs, your income indicator will flash red and Haalee will let you know what you’re missing. During this time, your factories and Engineers will continue to build, splitting the available income evenly across their projects. This results in everything finishing later rather than prioritising the materiel that you need the most, and should be avoided! Factory construction can be paused with a tick-box near the build menu, though engineers can only be told to go away.

Income is provided by controlling and upgrading regions under your control. The game map is split into regions, with a vast majority (including your starting region,) containing metal deposits, a minority containing radioactives, and one/several Turinium regions for winning the victory-point game. Your Nexus exerts control over the starting region, and all other regions must be connected to this region by capturing their respective power generators and forming an unbroken area of control. The connection between adjacent regions can be seen by fragmented yellow lines on the map, or the lines and borders on the mini-map.

There are four stages to the development of a region:

Below is a table for the income per deposit. For a a region with 4 metal deposits, the maximum for PHC will be 16 per second, and 14.8 per second for Substrate.

Units and buildings will cost either metal, or both metal and radioactives, to build. This is gradually subtracted from your storage as they are constructed, rather than being paid for up-front. Combined with income, the net changes to your storage reserves will be shown in + and - next to the current amount. Therefore, to balance the books as you expand and capture more regions, you will need a strategy to spend the additional income via more Engineers, factories, Quanta or Dreadnaught production. The following is a rough guide on the metal versus radioactives costs of Units and Buildings:

Knowing the above, a player that is floating on radioactives but crashing on metals can, for example, ease back on frigate production and invest more in teching and air units instead. The fastest way to spend metal, per factory, is to build combat cruisers. While Dreadnaughts cost ~

3000 each to build, the per-second usages is smaller since they build very slowly.

Quanta is the currency for all things not built directly on the field. The rate of Quanta being accumulated is determined purely by the number of Quantum Relays and Quantum Archives that you currently own, with no upper limit in storage (unlike basic resources). Having more Quanta than your opponent translates directly into better attack/HP upgrades, larger armies, and more opportunities to call in orbital strikes to influence the tide of battle. On the other hand, the building are relatively fragile (roughly one cruiser's worth of HP) and also cost a lot of Radioactives, which limits the number of Dreadnaughts, combat aircraft, and other fancy things that you can field with the sum of radioactives gathered so far. Since the building themselves can be placed anywhere, it is advisable to build them near the back of the map behind both aircover and Quantum Jammers, and/or spread out to protect against deep strikes from your opponent.

The tension between gaining earlier upgrades and stronger units is one of the core mechanic of Ashes. Try to accumulate Quanta too fast and you become vulnerable to airstrikes and pushes; too slow and you start to lag behind in upgrades and abilities. There is also another mechanic of Quanta: each time you trigger an ability or upgrade, those abilities upgrades will become more expensive the next time you use it. This means that slowly adding more eco will be needed throughout the game if you wish to keep upgrading at the same speed.

Logistics is the limit to the size of your army plus defensive buildings. All players begin with

100 at the start of the game. The Units list contains a reference of amount of logistics each unit requires, which can vary between 1~3 for frigates, and up to 30 for Dreadnaughts. The Logistics cap can be upgraded using quanta, seen in the table below:

Victory points, if you have it turned on in a particular match. The deposits are generally located in the center and marked by a more elaborate icon. Fortifying this region and building forward factories to support it is advised if you are not going for complete domination, as well as a Quantum Jammer if you are rich enough.